Most people report a relationship with some piece of equipment or machinery during their lifetimes. Often the item of the most intense feeling is one's automobile. For many, feelings ranging from contempt to passionate attachment are familiar memories easily elicited with just a brief reflection on their experience with a variety of equipment.

For myself, of course I experienced a teenage love for my automobile. However, when I think of the thought interaction possibilities with a mechanical device, it is my first IBM clone that comes to mind. My XTC soon became to me, my Ecstacy. This wonderful device seemed to respond to my desires and often gave others fits. Ah, you say, wishful thinking.

Perhaps, but consider this. Dean I. Radin of the University of Edinburgh in Scotland investigated the effects of mental intention on the output of random number generators. Using a sophisticated neural network to search for "signature" patterns of an individuals thoughts, Radin found the presence of "person-specific signatures."

His study confirmed the earlier findings of Berger, 1988; McConnell, 1989; and Nelson, Dunn & Jahn, 1986. Further, Radin offers some interesting thoughts for the use of this discovery. In his conclusion, he suggests that "an artificial neural network can learn to associate machine-generated random data with individuals who somehow 'mentally impress' patterns onto that data." He continues, "the present study also found that properly configured artificial neural networks can learn to associate data with specific mental intentions, demonstrating the feasibility of developing a new form of novel human-machine interaction technologies."

The Radin study was published in the Journal of Scientific Exploration, Volume 7: 4, 355-373.

Using Positron Emission Tomography (PET), researcher Endel Tulving of the University of Toronto, has offered the first data indicating that memory pathways turn left at the front of the brain to store information and right to retrieve the information. I found this study of particular interest since the my own Mirror Imaging Paradigm (MIP) would predict such a process. Perhaps a brief background and explanation of the MIP is in order. 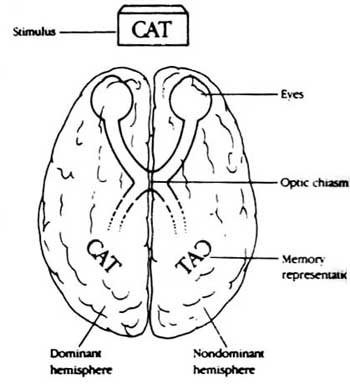 Increased brain activity in the right anterior region is indicative of an emotionally troubled experience, argues researcher Richard Davidson of the University of Wisconsin, according to a report in the Brain/Mind Bulletin (February, 1994).

Davidson suggests that the right hemisphere mediates "withdrawal" while the left is emotionally oriented toward approach. His suggestion is principally based on observations of increase and decline in immune responses for strongly right brained people, and pleasant or negative responses to film clips of a pleasant or unpleasant nature. Davidson also is aware of work conducted by researchers in Germany that reported "larger event related potentials" in the right hemisphere as a result of exposure to a nasty odor.

I don't believe that these observations necessarily commit one to Davidson's logic. It is as reasonable to assume that the left hemisphere is typically non-emotional. Emotion has long been believed by many researchers to somehow "exist" predominantly in the right hemisphere for the typical right handed model of hemispheric laterality. The absence of an emotional response does not mean a happy hemisphere. The Brain/Mind Bulletin reported a Body/Mind conference and billed it: IS THE LEFT THE HAPPIER HEMISPHERE? My answer, no. Perhaps it is the emotionally ignorant hemisphere, but to extend this to an emotional term such as ignorant is rather far fetched---or is it? Is ignorance bliss? What do you think?

A team of researchers led by Howard Friedman examined data derived from 1178 subjects originally recruited by Lewis Terman in the early 1920's. They found that a conscientious personality predicted longevity. Interestingly, they also found that the cheerful optimist lived shorter lives. Friedman cautioned that the latter finding needs careful interpretation. The study was published in the Journal of Personality and Social Psychology 65: 176-185.

Many graduate students have assisted my research by conducting important studies as part of their masters or doctoral programs. Indeed, the wealth of pioneering work developed by graduate students is invaluable. Following this tradition, Julie Anderson of the University of South Florida conducted a pioneering study which evaluated the "Effect of a Repressive Coping Style on the Immune System." A repressive style was determined to adversely effect the immune system. For her research, Ms. Anderson won the Psi Chi/APA Edwin B. Newman graduate Research Award. Congratulations Ms. Anderson and thank you from all of us for contributing to the mind-body connection.

In an authoritative and comprehensive manner, Dr. David Aldridge, associate professor of clinical research in the Faculty of Medicine at the University of Witten Herdecke in Germany, offers evidence that clearly shows spirituality to be "a viable idea even within the modern medical practice and that it is definitely an issue worthy of study."

Aldridge defines spirituality in the terms of psychiatrist J. Hiatt, as "an activity of the spirit on the mind." He further differentiates religion from spirituality in terms of transcendence. Religion is seen as aiding individuals to maintain a belief system where spirituality aims toward connecting the individual with a higher authority in a direct personal relationship.

Aldridge asserts that most terminally ill patients shift toward increased spiritual attention and cites the recent study of P. Reed who concluded that an awareness of spirituality enhances the well being of the terminally ill. Aldridge then turns to T. L. Saudia's work which examined the value of prayer in both maintaining health and as a direct coping strategy in patients about to undergo cardiac surgery. Saudia employed the Multidimensional Health Locus of Control Scales and a Helpfulness of Prayer Scale developed by himself. Saudia concluded that prayer was both a helpful coping strategy and a direction coping mechanism.

Aldridge reminds the reader that prayer was demonstrated by Byrd in 1988 to have very positive effects on coronary care patients; reducing the need for diuretics, intubation/ventilation and antibiotics as well as leading to an overall better outcome.

Where Aldridge's article is perhaps the most evocative is in the area of health beliefs and social explanations. He asserts the need to incorporate spiritual healing into traditional health care practices.

EMF Modulates Melatonin: A variety of cancers have been linked to electromagnetic fields (EMF) and now researchers believe they have uncovered the mechanism. Harden M. McConnell of Stanford University believes that EMF modulates the brain hormone--melatonin.

Feeling the Presence is in the Brain: According to researchers Jacobo Grinberg-Zylberbaum, M. Delaflor, Sanchez Arellano, M. Guevara and M. Perez, an evoked potential in the brain can be transferred to another. Employing electrophysiological measures, the researchers discovered "an interaction which occurs when subjects are able to feel each other's presence without the use of sensory stimuli.

Their findings were published in Subtle Energies, Volume 3:3, 25-43.

PSI Effects Demonstrated in Repeated Studies: Researchers Charles Honorton and Daryl Bem combined the data from 11 studies conducted by Honorton between 1983 and 1989 which avoided all of the typical methodological problems most psi studies have been criticized over. Using a ganzfield procedure, the researchers observed statistically convincing evidence for telepathic communication between senders and receivers. Even the devout skeptics are having difficulty dismissing the work of Honorton and Bem. Robert Rosenthal of Harvard University was quoted by Science News as saying, "Bem and Honorton's article is very sophisticated statistically and you can't dismiss their findings."

A Loving Heart: According to an article in Brain/Mind Bulletin, Rollin McCraty and Glen Rein have demonstrated connections between heart patterns and positive emotional states. It would appear, according to the researchers, that normally chaotic electrocardiogram spectrum patterns become coherent during positive states. Maybe we should all pay more attention to what our hearts tell us.

The Controversy in the Differences of Audio Subliminal Technology